I recently went for a trip to Taiwan. It was a couples trip sans kids. Although I missed them immensely, it was good to take a break from work and kids once in a while.
The flight took more than 4 hours. The first thing most tourists to Taiwan did was to swiftly move on to a special counter to obtain a Taiwan mobile number. It makes communication easier locally and you can use mobile data with no worries at a reasonable price. Or you can do like me, I applied for free 3G micro sim card through this Digital Tour Buddy programme at the Youth Travel in Taiwan website. But you must apply for it one month prior to your tour date. About 10 days before my tour date, I received an email approval from them and collect the sim card when I arrived to Taiwan. The sim card comes with a loaded value of NT$50 but if you feel that it's not sufficient, you can always top it up. The sim card is only for receiving and making calls only. Lucky for me, my brother in-law applied for a Taiwan mobile number. So we all shared his mobile data. Taiwan's mobile data is pretty fast and good. You won't encounter much problems with the reception and speed of the data even at the highlands. Telecommunications is highly important for us when we're in Taiwan because I need to keep in touch with my kids constantly.

It's their winter season now and the night is longer. When we arrived at our first stop and that is Jiufen (九份), the sun had already set. The sun sets about slightly pass 5pm when we were there. So plan your activities well and try to accomplish everything before the sun sets during winter season. Otherwise, you'll either have to return to hotel or visit night markets earlier.

Jiufen is a nice place to visit. A must-visit place, I should say. Nice scenery, there's old streets to walk around, lots of things to see and eat. It's a tourist spot so it can be crowded at Jiufen Old Street. 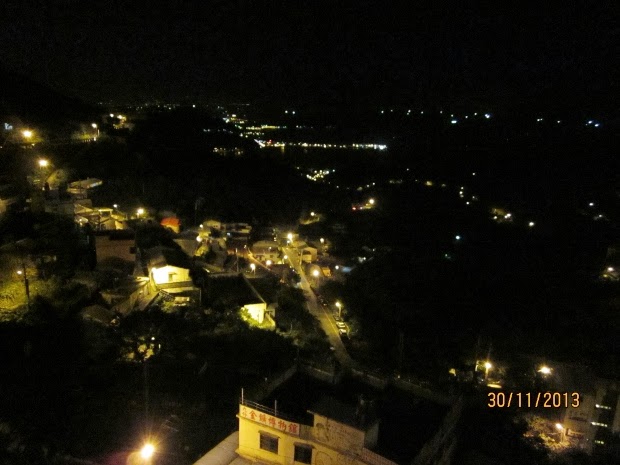 This song is dedicated to the most sweetest sweetie pie of mine. Happy Birthday dearest dahling and may you have the best things in life could ever bring! I will always love you!
Posted by Carolyn (Lil' Dahling) 2 comments:

Joseph had his first kindy concert not too long ago. Since I shared big sister's concert before, it's only fair that I share his too. He didn't seem too happy at first when I dropped him off at kindy. They had to put on their costume first and the teacher will ferry them to the concert venue to have their last rehearsal before the parents arrive. We arrived at the concert venue very early to get good seats.

I was crossing my fingers that he will be fine during his performance and save me from embarrassment. Haha. To my relief, it was a ok! *peace sign*

It has been some time since I last did craft with the kids. I was inspired by a puppet craft I saw on Pinterest and also the kids like pirate stuff. That is how the pirate puppet craft came to be. This craft needs toilet paper roll, a nifty idea to recycle and ahem..actually to reduce my ever growing collection of toilet paper rolls in the house. It's going to invade my kids cupboard very soon!

Ok swaying back to the topic, this pirate puppet craft will be fun to make considering how cute they look and it's really not hard to do. 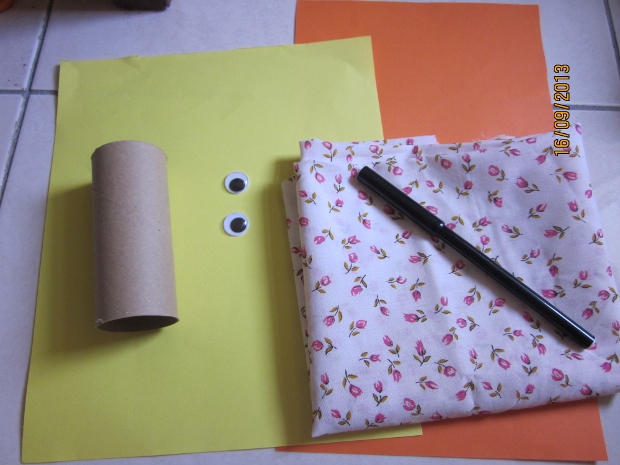 You will need the following for the girl puppet:
1. 1 toilet paper roll.
2. Orange paper since I don't have beige.
3. Yellow paper for the hair or whichever hair colour you fancy.
4. Some cloth from any old clothes that you can't fit anymore.
5. Black magic pen.
6. 2 googly eyes. 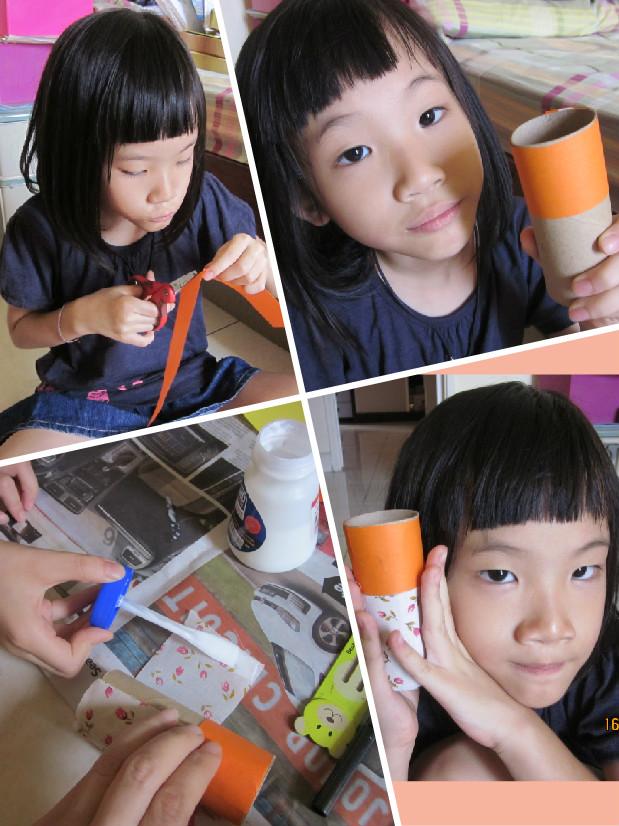 Use the glue and paste the strip of orange paper around the top of the toilet paper roll.

Measure the remaining bottom part of the toilet paper roll so that you can the length accordingly on the cloth. Paste the cloth around the bottom of the toilet roll. 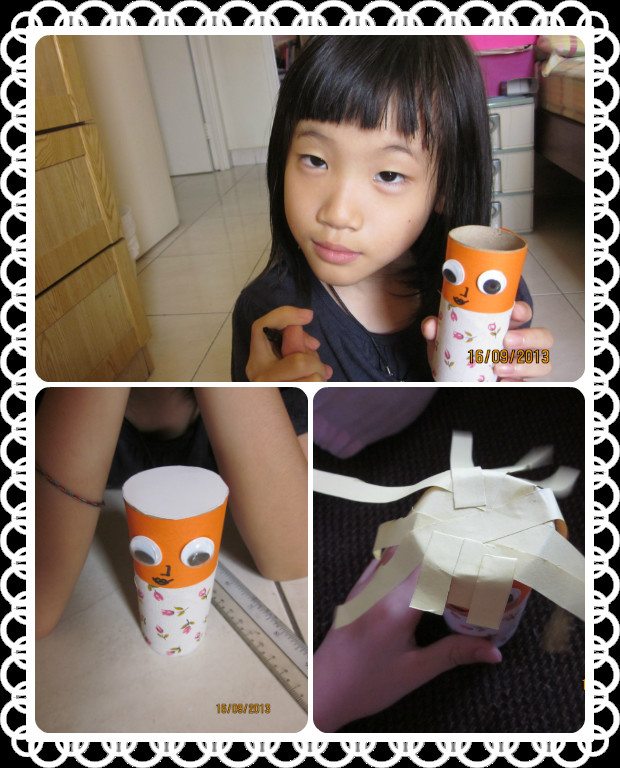 Stick the two googly eyes then draw the nose and mouth with the black magic pen.

Using the toilet paper roll, trace a circle and cut it. Paste the circle right on top of the head to cover the hole.

Cut strips of yellow paper about 1cm wide and paste it on the head to make the hair. 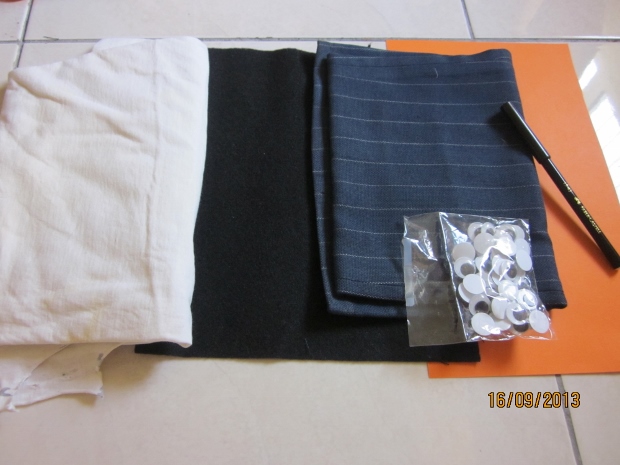 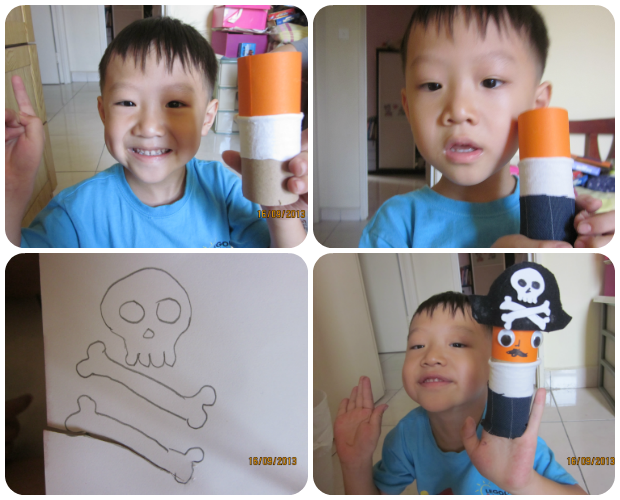 Repeat the same steps as the girl puppet for the face and clothes. Only difference is the puppet has a top and pants now.

Do the same for the googly eyes and face. This time the pirate has a moustache.

Draw a skull with two bones on a white paper and cut it out. Cut a shape of a pirate on the black felt. You need two pieces to wrap around the puppet's head. Glue the skull and bones onto the hat. And the pirate puppet is ready!

So two down  for my toilet paper roll collection and the kids get to do puppet shows, a fun extension of pretend play which can hone some important learning skills like communication skills, social skills, creative skills and language skills. Now excuse me while I go watch their show. ;)

Hello there! I am still here. Having a blogger's block recently and suddenly decided to share some videos for a start.

The kids love it when I borrow nursery rhyme books from the library. I will sing to them or they will sing-along and sometimes do a performance for me. The fact that I haven't been recording a video of them of late, I thought I should wake my lazy bones up and record their performance before they're all grown up. Kids really grow up so fast, don't you think?

Do enjoy the videos!

Another year, another birthday. Joseph is 4 today. Happy birthday my cute one!

Here are pics of his birthday celebration done in school.


Happy birthday dearest Joseph! We're so thankful to have you in our lives. May your life be always bright and breezy! Looking forward to celebrate many more of your birthdays to come! Hugs and kisses. Love you.

Proud Of My Girl

Yesterday my daughter brought back her results for her Chinese test. I didn't even know it's exam time, yo! Nor does Elizabeth knows it's exam time too. We were very sick one week and she missed school for a few days. So maybe she might have missed the announcement.

Anyway, I'm so proud that I had to include the event of this proud moment in my blog. She got 100% for her Chinese test. From a girl who speaks English at home, I think she's done a great job. We were worried and she was also worried herself that she would face difficulty in school. But she made it. I'm so happy for her.

I went through her paper and I can only read some of the Chinese characters. She can read all. Now, she's officially better than me. Haha. I hope it's a smooth journey for her from now in her Chinese subject. :) 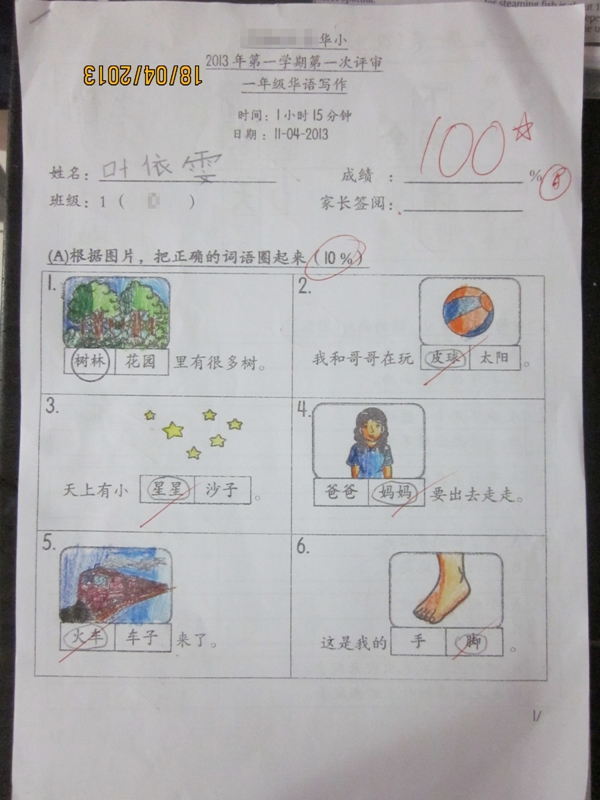 A Little About Me

Carolyn (Lil' Dahling)
A working mommy of two lil' dahlings and a wife to one big dahling..;)